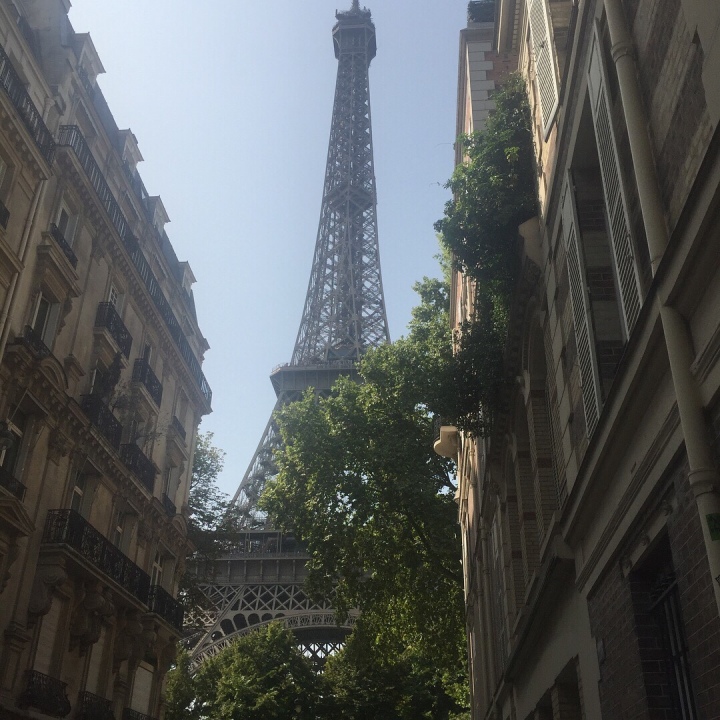 Paris has a certain je ne said quoi and my trip had a decisively different appeal as a solo traveller. The culture, history and artistic flare that the city has is unmistakable. As promised this post will give you an overview of the places that I visited.

On my first day after checking in at the hotel Les Matins de Paris (see my post here about the hotel and its fantastic location) it was a short 15 minute walk to Sacre Coeur, which is in the 18th arrondissement. The Montmartre area around the Sacre Coeur is full of winding paths, cobbled streets and has this magical quality. Street artists surround the area and there are plenty of opportunities to have your portrait done as a souvenir while budding musicians play and mime artists perform. It is one of those places that you can just spend hours walking around, looking at the art (and wanting to take it all home!) There are numerous cafes where you can sit, relax with glass of vino while people watching. 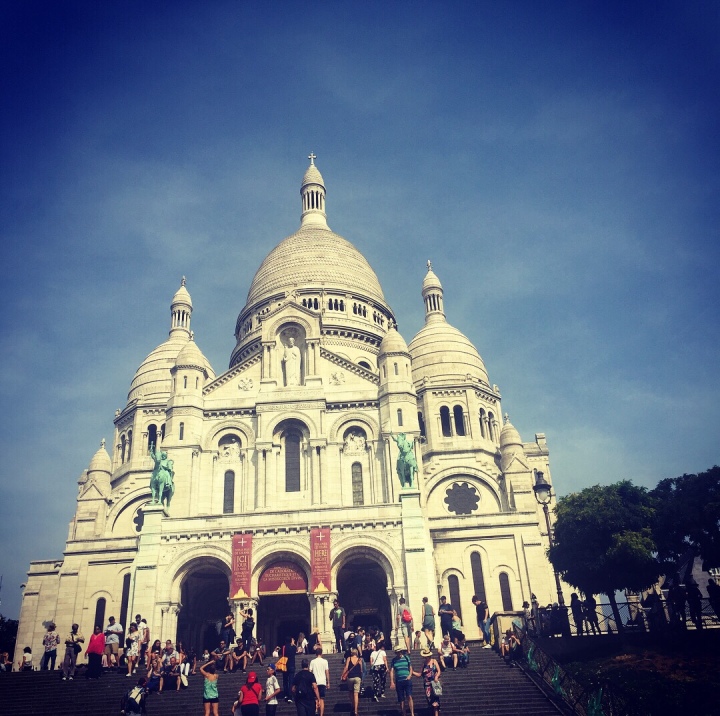 Sacre Coeur itself has an amazing history with the Montmartre area being used by the Romans to worship the Gods. The Basilica was built between 1875-1914 by Paul Abadie dedicated to the ‘Sacred Heart’ of Jesus. Sacre Coeur welcomes approximately 11.5 million pilgrims and visitors each year and it is not hard to see why! Sacre Coeur has an eclectic atmosphere with performers, artists and pilgrims flocking to see the glistening chalk-white building with its dome and bell tower reaching 83 meters high, making it the second highest point in Paris (at 213m) after the Eiffel Tower (324m.) I have posted a video of Sacre Coeur on Instagram so that you can appreciate those magnificent views!

Entrance to the Basilica is free but you can expect to wait, you can go to the top of the dome and enjoy the views of the city are spectacular for a fee.

The Louvre Museum  has one major attraction – The Mona Lisa. It is synonymous with great art and magnificent exhibitions, currently the museum is open every day except Tuesdays and open night-time until 9.45pm on Wednesdays and Fridays. Starting life as a museum in 1793 the worlds largest museum will have something for everyone. I have visited the museum once before and on this occasion the massive queue made it impossible to visit for a second time. Of course the main pyramid entrance cannot be missed for a photo opportunity. 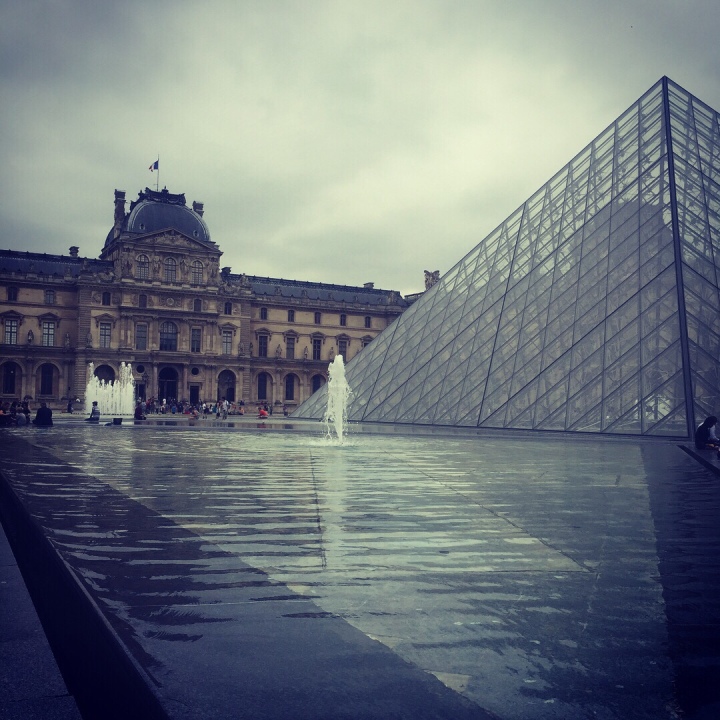 Walking along the Avenue de L’Opera links the Louvre Museum with the Palais Garnier which should take you around 20 minutes. Palais Garnier was built between 1861-1875 by Charles Garnier and was the premier home of the Paris opera until 1989 when the Opera Bastille opened and now the Palais Garnier is mainly used for ballet and exhibitions and houses the Paris Opera Library-Museum. 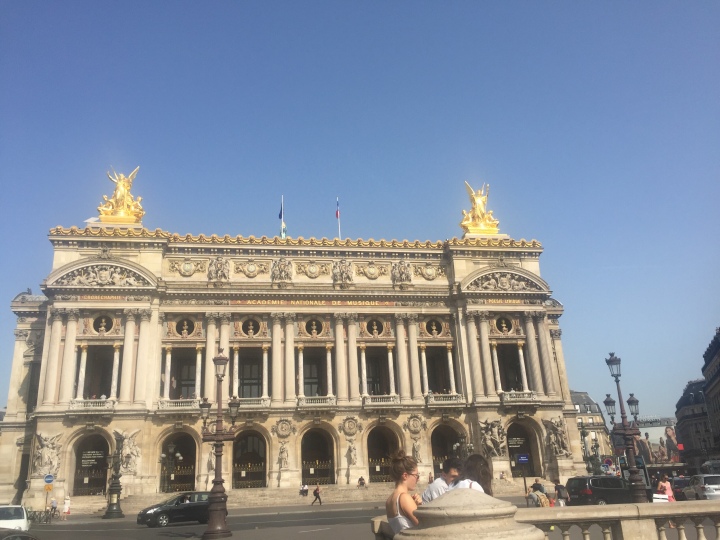 Palais Garnier has an opulent feel about it with the marble friezes, columns and statues which evoke Greek Mythology. It is a stunning building and as you can see very photogenic!

One of the most iconic, if not the icon of Paris is the Eiffel Tower, built by Gustav Eiffel in 1889 to commemorate the 100 years since the French Revolution and it is magnificent! Once you have found your way to the tower you need to decide which corner of the tower you would like to make your way up. One corner has a lift and the other has stairs – definitely check this out before you join the queue, as they are long and once you are in you do not want to move. It is also cheaper to walk all the way than to get the lift.

At the very top of the tower the view will not disappoint, it is truly spectacular. You can also enjoy a glass of Champagne (€22). You can stay as long as you like and there are plenty of other attractions on the tower itself including a glass floor (which was really fun) and restaurants, historical information and  souvenirs. It does get extremely busy and you need to be prepared to wait to access the top floor. 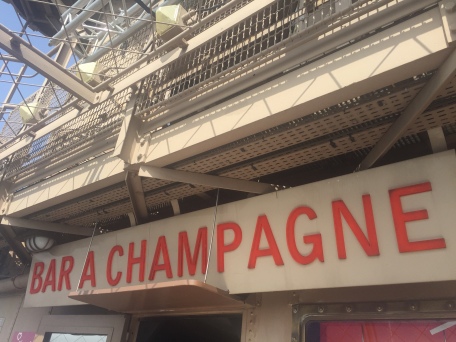 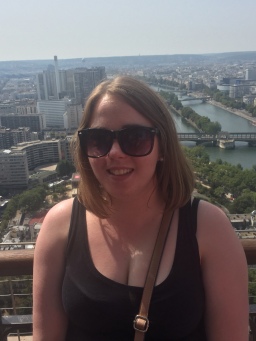 The tower is sensational at night when it is all aglow and this is something that I am hoping to see in the future.

The famous music hall of Moulin Rouge, made famous by its caberet performances and zest for life appeal that the hall brought. 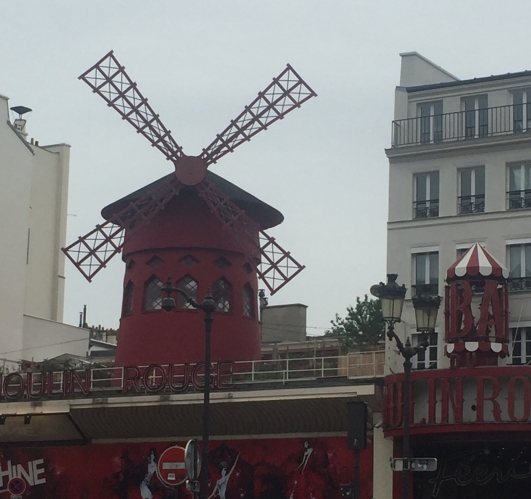 The Moulin Rouge is situated a short walk from Sacre Coeur in the 18th arrondissement, however the charm and elegance of Montmartre is not present here. In my opinion the Moulin Rouge has continued to exert a certain type of influence over the surrounding area and as such the surrounding streets appear to be a little run down and in need of some TLC. There isn’t a great deal that I found to do in this area other than the music hall, it is something to say that you have seen. I didn’t go inside as to be honest I was underwhelmed with the location (it’s very small and next to traffic lights) and just felt that other areas of Paris would be more interesting. I would love to be wrong though – if anyone has visited the Moulin Rouge please comment and let me know what you think.

Take snacks and lots of  water, especially in the summer (unlike Rome I didn’t see any free water fountains to top up.)

Under 26? (Sadly I am not..) But if you are you can get a reduced entrance fee into any of the popular attractions including the Eiffel Tower, Louvre, Sacre Coeur and Palace of Versailles. Just remember to bring your ID with you to prove your DOB.

Advance buying your tickets is the best option if you want to skip the queue and save hours of time – something I wish I had done!

Have a plan but don’t be to strict as wandering around Paris you will inevitably find something that catches your eye and your plans change.

Thanks for reading, I hope you have found this useful if you are planning a trip or just dreaming of going.

This site uses Akismet to reduce spam. Learn how your comment data is processed.